HEIMPLANET DEVELOPS THE MOST WIND-RESISTANT TENT IN THE WORLD

Heimplanet, the German start-up from Hamburg, known for The Cave tent is official partner of the Red Bull Storm Chase 2012. In collaboration with statisticians and engineers Heimplanet developed a tent that resists winds up to 180 km/h and provides enough space for the filming- and production crew to store their equipment inside (diameter 4.5 mtrs.), meeting exactly the expectations the Austrian beverage company set up for the development.

The first steps towards the collaboration between Heimplanet and Red Bull were taken in fall 2011. The Red Bull Storm Chase is the most difficult windsurfing contest on the planet, separating the boys from the men. 10 Surfers from around the globe are battling over the crown of storm-windsurfing. The contest system is pretty easy to understand: There are 10 Surfers in the first mission. 6 of them are moving on to round number two and only 4 are fighting for the crown in round no. 3.

To guarantee stormy conditions for the surfers, the Storm Chase is going to be extremely flexible. During 4 months of waiting period everyone, the surfers and the crew, is on standby to be ready to go to one of the 7 locations world wide, that got picked as a contest side. Round number one kicks of as soon as 10 Beaufort (54 knots / 100 km/h) are measured at any of the spots.

Wind that strong, makes water and sand fly. The judges and the filming crew can call themselves save though, thanks to the MAVERICKS tent developed by Heimplanet, which makes reporting about the event possible. The characteristics of the media tent MAVERICKS by Heimplanet are the easy handling, durability and its Design. Mavericks is inspired by The Cave and uses air to create a strong frame.

The IDG (Inflatable Diamond Grid) is made of 10 double-layered air beams, which are designed, based on the geodesic principle. Two air circles can be inflated with a regular hand-pump and then be separated into ten independent chambers. The IDG, which is now patented, is the key to the unique tent’s stability and strength. The tent works as one unit. Simply unroll it and inflate it, no assembling necessary, to guarantee a smooth chase. 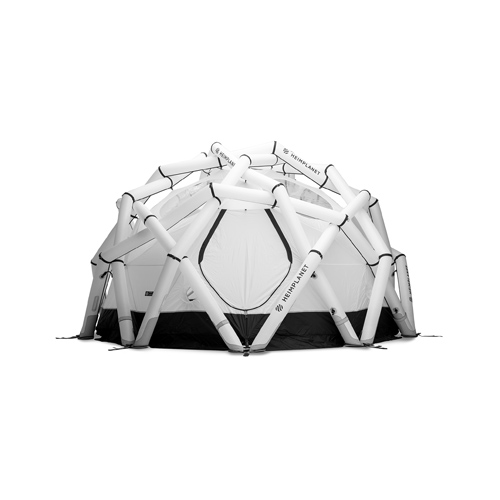